The sunrise through the haze on the outskirts of Delhi, India, looks alien to someone from the foothills of the Canadian Rockies, who is habituated to cold, clear morning skies.  The blood red orb in the sky reminds me of a summer long past when my home town lay engulfed in smoke from raging forest fires upwind, a sight that led us to quietly speculate whether the apocalypse had descended upon us.

In Delhi, though, this is not the apocalypse.  This is just an ordinary day in December; the 22 million people of the city rising to work or study; the streets jammed with auto-rickshaws and buses that belch soot into the air.  Fires along the roadsides burn trash that cooks the food and warms the hands of the poor.  On the farmland surrounding the city, piles of organic waste from the recent harvest are burned, adding to the smog that envelops the plains for hundreds of square kilometers.

With untouched natural beauty a distant memory in this place, it seems an inauspicious location for planning a global approach to a safer, sustainable chemical future.  However, in December 2013, delegates from Brazil, Mexico, South Korea, Canada, the United States, the United Kingdom, and India gathered to launch a global initiative in green chemistry.  With a mixture of representatives from industry, academia, and government, the bold goals of this group are not only to broaden green chemistry research, but to be sure it reaches application in industry and an influence in government policy where it can make a tangible difference.

Green chemistry is the design of chemical processes and products that minimizes both the use and generation of hazardous substances.  As a field, it targets the entire life cycle of a chemical product.  This includes sourcing raw materials in a sustainable manner, making production as safe as possible for those involved, creating products that are non-toxic to humans and the environment, and designing products for degradation to environmentally benign endpoints after their useful life.  The bulk of what green chemistry comprises is summarized by twelve principles first introduced in 1997 by the “fathers of green chemistry”, Paul Anastas and John Warner.

For a more straightforward understanding, these twelve principles can be broken down into three central tenants of green chemistry. The first is to reduce hazard. Green chemistry aims to be inherently safe by avoiding high pressures and temperatures and toxic reagents.  It is important to consider this hazard both in terms of products, which are fairly obvious as a consumer, and in terms of process.  The latter may is important given that much of the labour force behind chemical manufacturing does not have the education and training to make informed decisions about protection, and because their exposure to hazards is ongoing.  Product hazards may hold similar risks; examples include pesticides sprayed in agriculture and lubricants used in the automotive industry.  While traces of pesticides on produce and a bit of grease on your hands may not impact your health and well-being, chronic exposure over a lifetime of work on a farm or an auto-body shop have well-documented negative effects in terms of neurotoxicity, carcinogenicity, and respiratory disorders.

The second central tenant of green chemistry is to reduce waste.  While this is generally intuitive, the specifics can contain some amount of chemical subtlety, particularly where energy efficiency is concerned.  The recycling of solvents is a fantastic way to reduce material waste, but caution is required in applying recycling because of the energy requirements.  Similar to the “Three R’s” (Reduce, Reuse, Recycle), championed in Canadian primary schools in the 1990s, using less material negates the need for creative processing, consistent with the first principle of green chemistry: “It is better to prevent waste than to treat or clean up waste after it is formed”.

The third central tenant of green chemistry is to consider environmental impacts.  This looks beyond the human hazards associated with chemical products and emphasizes care for the natural environment.  An important emphasis of environmental impacts is life cycle analysis, where a product is considered for its carbon footprint, energy consumption, and environmental persistence in its material sourcing, production, during use, and at the end of its useful life.

One major area of focus in green chemistry is on elemental sustainability.  Many of the elements that are used in both traditional and new energy technologies are only present in the earth’s crust in a limited amount: lithium, gallium, arsenic, rhodium, palladium and platinum are just a few elements found in batteries, solar photovoltaics and fuel cells that will experience supply shortages in the next 50 to 100 years. Platinum in particular also faces social sustainability challenged in its supply; civil unrest in South Africa around working conditions in platinum mining have shed light on the “dark side” of this precious metal. In response to this challenge, a number of “greener” technologies that rely on earth-abundant materials have arisen.  Iron- and cobalt-based catalysts for fuel cells that closely resemble haemoglobin have been demonstrated in laboratory environments. Solid oxide fuel cell technologies using ceramic materials have seen significant market penetration, and provide an environmentally sound alternative to platinum-based fuel cells in this innovation space. Innovations that recognize the need to use readily available materials are continuing to grow, in fuel cell chemistry and in many other fields.

Another topic of great interest in green chemistry is bio-based waste valorization, which is the conversion of organic waste materials into value-added chemical products. While the detritus of harvested crops in northern India is burned to provide heat and to kiln bricks, there is potential to derive much greater value from this waste than the kilojoules of energy released in combustion.  Making carbon-carbon bonds is one of the most challenging and valuable chemical reactions; extensive networks of carbon atoms provide the basis of plastics, electronics, pharmaceuticals, and other materials. While petroleum feedstocks are currently the basis for most materials we produce, we could potentially replace them using biomass waste, since the cell walls and internal structures of plants are rich in the necessary chemical structures. Many processes are already in use to extract these valuable carbon-carbon bonds from biomass waste.  Levulinic acid, extracted from paper mill, agricultural and lumber industry waste, is converted into dozens of valuable starting materials for existing chemical processes that currently depend on petroleum feedstocks. Among many material applications, roofing tiles made from post-consumer waste cardboard, starch, and fatty acids are making their way into low-income and rural housing developments in India. 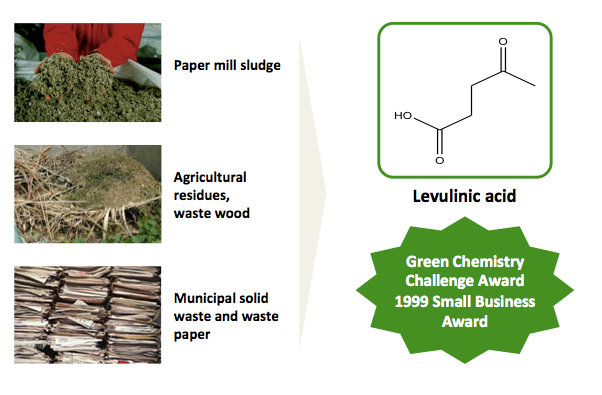 In the fledgling international Green Chemistry Network, there is interest in developing these processes from several fronts.  South Korea is a major producer of electronics, and while their institutions lead the way in developing catalysts to convert petrochemical products into plastics for this industry, they also recognize that implementation of regulations (such as REACH and RoHS) are gradually changing the expectations of their global consumer markets.  Both Brazilian and Indian researchers are closely connected to the agricultural industries of their countries, and for them there is a path forward in this “waste-to-wealth” approach.  Specifically, there are opportunities for countries that are not R&D leaders in the traditional chemicals industry.  They can leapfrog traditional methods and develop innovative chemical processes that are uniquely suited to the biomass available from their own agricultural processes.

Green chemistry presents a wealth of opportunities in research and development on a global scale.  As traditional economies recognize the need for cleaner processes, resource shortages will lead to further innovations to bring waste products and earth-abundant materials to the forefront as we design a sustainable future.

Heather Buckley is a 2009 fellow of the Fulbright Science & Technology Award, from Canada, and a PhD Candidate in Chemistry at the University of California Berkeley.

The March edition of TGS magazine was guest edited by Puripant Ruchikachorn, a 2010 fellow of the Fulbright Science & Technology Award, from Thailand, and a PhD Candidate in Computer Science at Stony Brook University.